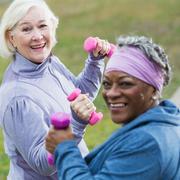 Many of us were taught to believe we have to hit the gym several times a week and follow a strict diet to see significant health benefits. But according to an article published in the Huffington Post, a recent study by French researchers found that even 15 minutes of moderate-intensity exercise each day, such as brisk walking, is enough to reduce the risk of death in older adults by nearly one-quarter.

Researchers from the Department of Clinical and Exercise Physiology at University Hospital of Saint-Etienne in Saint-Etienne, France followed two sets of adults for more than a decade — a French cohort of 1,011 people aged 65 and an international cohort of 122, 417 people aged 60. Subjects were categorized as having low, medium or high levels of physical activity, or no activity at all.

The current recommendation by the Centers for Disease Control is that older adults get in at least 150 minutes of moderate exercise per week, or 75 minutes of vigorous exercise. That means only 15 to 30 minutes of exercise each day, five days a week, but many older adults aren’t even reaching the minimum.

However, study author Dr. David Hupin said even the low level of activity, which equates to 15 minutes of brisk walking each day, has significant benefits—it was associated with a 22% reduced risk of death in older adults compared to those who were inactive, a percentage that rises with increased activity.

Luckily, we have an abundance of beautiful trails and paths to explore in Wellesley, including the Beebe Meadow and Beard Trail, the Centennial Reservation Trail and the Fuller Brook Path. There’s also the Charles River Path, which runs right behind our community at Waterstone. And when you don’t feel like making the drive or trek to one of these trails, you can always walk around your neighborhood!

Find more information about the study here. For more guidance on how to stay fit as you get older, check out this guide from the National Institute on Aging.