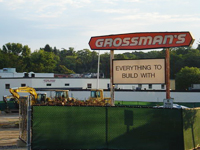 For many in and around Wellesley, the Grossman’s name has special significance. The Grossman family business began in the late 1800s when Louis Grossman left Russia to pursue the American dream. The Grossman’s first piece of property was in Quincy, purchased in 1907. The business later expanded across New England, and came to Wellesley in the 1960s. The Waterstone at Wellesley site was once home to a Grossman’s hardware store, which had been vacant for 16 years before it was cleared when work on Waterstone began.

Waterstone designers and developers plan to incorporate the historical significance of the Grossman legacy into the design of the community, from using the same iconic orange and white colors in certain portions of the design to utilizing portions of brick from the store in the actual construction. The large, iconic “Grossman’s” sign, though, will have a particularly special use: it was donated to the Quincy Historical Society several months ago. The Quincy Historical Society was excited to receive a portion of the massive sign, said Executive Director Ed Fitzgerald. The Grossman’s business is “probably the biggest regional success story,” Fitzgerald said. They offered not only building materials but were a “vanguard of home improvement” and a precursor to companies like Home Depot and Lowes, he said. There is a strong identification with the Grossman name for anyone in the Quincy area, especially those 40 and older, Fitzgerald said. “It’s a bit of a catch,” he said of the sign. “There isn’t a whole lot of stuff from that time so we were glad to take advantage of this opportunity.” The Quincy Historical Society is holding the sign in storage while officials decide what its best use is, Fitzgerald said. It may become an exhibit in a museum, or it could be used in a public space in Quincy as a way to partner the old with the new. Grossman’s now exists as The Grossman Companies, a real estate management, investment, and development company with properties across New England. The company’s core group of employees is headquartered in Quincy.